How to embrace failure

To embrace failure is to embrace success

We may not always think about it this way, but there can be no real success without a lot of failure along the way. We can always get lucky, of course, but while a bit of luck can certainly be necessary, luck is rarely enough to get you all the way to a truly meaningful achievement. Therefore,  instances of failure are just as much part of the road to a meaningful achievement as instances of success. If we don’t embrace those instances of failure we do not embrace the journey. If we don’t embrace the journey we may never finish it. Chances are we will quit before we reach the destination. Especially if we are going for those very hard to get to places.

An easy mistake to make in all this is to think that not punishing failure is enough. It’s not. You have to actively embrace failure and you have to be very explicit about it. The reason is that the default connotation of failure in our culture is very negative. If managers and colleagues don’t explicitly show that they embrace failure, people will assume that managers and colleagues don’t like failure. This may not be fair or accurate, but it is nevertheless often what ends up happening, because that’s the way most people have been conditioned to think.

So if you don’t explicitly embrace failure and you note that your organization is failing to fail, it’s probably not a good sign.

Either people are not trying hard enough to push the envelope, because of fear of failure. (Which is great if you are running a company of school bus drivers, but not great at all if you are running a tech company.) Or, they are hiding their failures from you. Which is never a good thing. Unless you’re the director of Advanced Weapons Research for an evil space empire and you are overseeing the completion of the death star. But that’s about it. In all other situations its a bad sign.

Embrace failure in others

If you like having peoples’ strengths on your team,  you have to accept their weaknesses too. That’s just the deal with humans. They always come with pros and cons. You have a lot to gain from aligning your leadership and collaboration style to this fundamental fact. It’s easy to be sloppy about this and to focus on known flaws and weaknesses in the way we give feedback, even if those weaknesses are in fact just part of the package and not something that truly stops the team from performing. Your job as a manager and colleague is not to “help” your coworkers evolve into YOUR ideal version of them, its to help them evolve into THEIR best version of themselves.

Of course, there are going to be situations when you really have to address flaws and shortcomings because they are truly getting in the way of the team, or when you have to discuss the (lack of) learning and development in certain areas. You’re not going to do anyone any favors by sugarcoating stagnation or lack of effort or lack of contribution. When those moments come, however, I promise you that people will listen more to your feedback if you have historically been very accepting of flaws and failures that are not of this nature. If you instead have been nitpicking on every single thing that could have been better, people won’t know that you happen to have a point this particular time around. The boy who cried wolf and all that…

Embrace failure in yourself!

This may be the most important step actually. As discussed, most of us have been trained to some extent to feel great about moments of success and to feel pretty shitty about failure. Sometimes the bad feelings about failure go all the way to deep shame and self-hatred. Often feelings about our own failures and weaknesses get projected onto others. It can get pretty dark.

Not embracing failure in yourself is very likely to lead to deeper and more serious failure. What really makes a difference in the long run is the intensity of failure and success in each instance, how this intensity develops between iterations and how many times we try.

If you feel very bad about failure you will make a big deal out of each little failure and you will end up focusing on the wrong things and doing the exact opposite things you’re supposed to, like denying to yourself and others that you have failed, or not wanting to think too much about the fact that you failed. Also, you will subconsciously try to avoid this emotional discomfort happening again, meaning you will become too risk averse and uncreative.

Finally, not embracing your own failures will make you a bad leader. A hurt ego is probably the most common reason leaders let small insignificant failures grow out of proportion and take such a long time to correct – in turn creating long periods of bad situations for their teams even when the team is trying to tell them that their plan isn’t working. A quick “oh right, you are correct, I got that totally wrong, let me change my decision right away” will often be the best response to failure, but it takes training and focus to be the kind of person who can just rise above it all and say those things.

I mess up about 1-2 times for every 5 tries. Since I’m involved in a lot of decisions this means I have a pretty short mean time between failures. I’ll mess up several times a day. Does this make me a bad CEO? Nah, I don’t think so. I think I’m alright. It’s possible that I could improve my mean time to failure by being harder on myself. But I find that a much more efficient way to learn and improve is to just embrace and laugh about the times I get things wrong and to very quickly rectify the mistake by changing my decision.

Hope this perspective helps. Now go forth and fail a lot today! 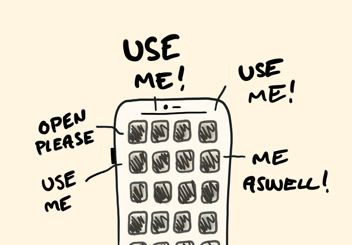 We’re all addicted to tech. Here’s what’s finally going to save us